Interview with Alishan Valiani, Winner for the 2020 Michael Collyer Memorial Fellowship in Screenwriting 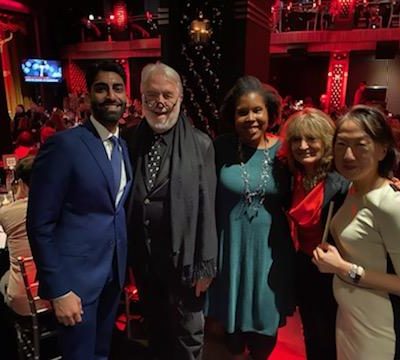 Alishan Valiani, a student at the University of Pennsylvania, is the recipient of this year’s Michael Collyer Memorial Fellowship in Screenwriting, which was formally presented to him at the WGAE Awards this past February in New York City. We recently interviewed Alishan to learn about him, his writing process and what he intends to do during the course of his fellowship.

I knew I wanted to do something related to writing by sophomore year of
high school. I was always a math and science person, but that year, my
English teacher told me to focus on writing because she was impressed by some of my work for class.

I didn’t start focusing on screenwriting until sophomore year of college however. Getting the Michael Collyer fellowship also helped me recommit to pursuing a career in writing.

I know your mom came with you to the WGA awards. What was that like for you? For her?

It was great. My mom was excited to go, and we both really enjoyed ourselves.

What do you think makes a good story and what kinds of stories are you drawn to?

I constantly struggle with the question of what makes a good story or what makes a story worth telling. I haven’t really figured it out, but as I see it now, a good story is one that makes you feel something. Other qualities of a good story are its ability to immerse the audience in its world while maintaining universality.

What are some of your favorite books? Movies?

Haruki Murakami’s Kafka on the Shore, Dan Brown’s Robert Langdon book series, Farid ud-Din Attar’s The Conference of the Birds, Kazuo Ishiguro’s The Remains of the Day, All of Franz Kafka’s works

It’s different every time. I often go several weeks without writing anything. Then, once I have a good idea of what I’m going to write, I’ll sit down and try to work consistently until I’m finished. I’ll outline a lot. I’ll also take a lot of notes. Certain scenes will be outlined in extreme detail. I’ll
draw a lot of diagrams and charts. I may write background on the characters. After the outlining/planning stage, I’ll write the treatment
for the script. Then I’ll make a scene list and organize all my notes chronologically. At this point, I’ll start the draft-edit-repeat cycle.

What’s the most surprising thing you have learned from writing?

How different you are day to day. The draft you read from six months ago will be written by a completely different person than you are today.

What is your interesting “writing quirk?”

I sincerely don’t think I have one.

What do you hope to learn and accomplish during the course of the fellowship?

I’m aiming to complete In Sects and start two to three other scripts over the course of the fellowship. I also plan to redraft my previous script, Parking Ticket. I want to then use these scripts to enter more screenwriting competitions.

How do you juggle writing while also being a full-time student?

It’s extremely difficult to read and write independently when you are constantly bombarded with hefty readings and essays for class. I usually
like to focus on writing during my school breaks. Otherwise, when I don’t have too much schoolwork, I’ll dedicate a weekend to writing.

What do you like to do for fun- when you’re not writing or studying?

I love to watch TV and movies. I watch about a movie a day. I also love to cook and garden, and I enjoy playing the Theremin.

I’ll hopefully move to LA and get a job—most likely in a mailroom somewhere.