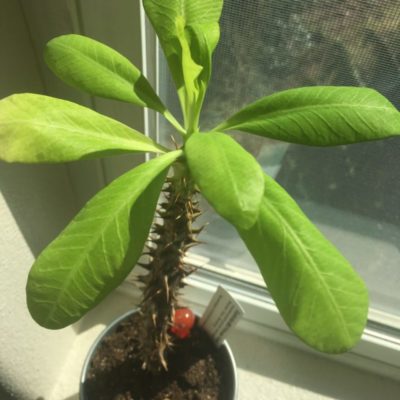 BLOOMING IN A NEW ENVIRONMENT! by Ariana Barajas

I left my husband on Christmas week 2019. I moved to my friends’ new home (mostly running on fumes and by myself) and into the room our friend was vacating on her way to visit Vienna for three months. My friend Nico left two plants in the room. I ignore one’s name, as the tag is missing and the other one is a succulent shrub by the name of Euphorbia Milii Primrose Yellow. When I moved in, the succulent had two leaves, and one was about to fall off.

As I moved my things in and unpacked them, I realized just how much I needed to make the space my own-especially after the separation. The Nameless Plant stayed in the room as it coordinated with the bookcase decor and the succulent moved to a new place-the bathroom.

It is my track record to kill plants with my magic death touch, as soon as I hold them in my hands. Even tough ones like succulents have not survived my tender, loving, care. The succulent my friend left behind had two withering leaves on the very top of its spiny shaft when I relocated it to its new home- not unlike me and/or my brain after a marriage that lasted less than a Costco pack of hand soap.

The differences between the bookcase in a dry, sometimes heated, sometimes sunlit bedroom and the bathroom with its steady supply of steam from the shower and consistently blowing heat from the bathroom created an environment in which the plant sprouted five leaves since it shed the last of its original two. The leaves are bright green, broad, and seem happy and full of life. New thorns have also appeared on the top of the shaft of this happier succulent. New thorn growth means more leaves will bloom.

Not unlike the succulent that was left behind, I too, am thriving in my new environment. The driving force and final push for leaving the marriage was a sentence in a book by Dr. Jim Phelps who stated those of us with chronic, mental health needs must take responsibility to preserve whatever neurons haven’t withered away from our cycling (in the case of people managing symptoms in the Soft Bipolar Spectrum). Dr. Phelps also reminds us that neuroplasticity is a thing-that as long as I am not watching the clock to see it happen, I can “rehydrate” those withering brain cells.

The wildest thing happened to the two original leaves the succulent shed – I left them on the soil so they can be close to their true self and three weeks after they fell off, they started moisturizing, unfolding, and showing their green! It is as if the leaves know about neuroplasticity. Or, as if the leaves are reminding me they are cells, that I am cells, and in a new environment, I too can unfold my myelinated nerve fibers and save some of them from further withering.